Are inflatable kayaks any good? 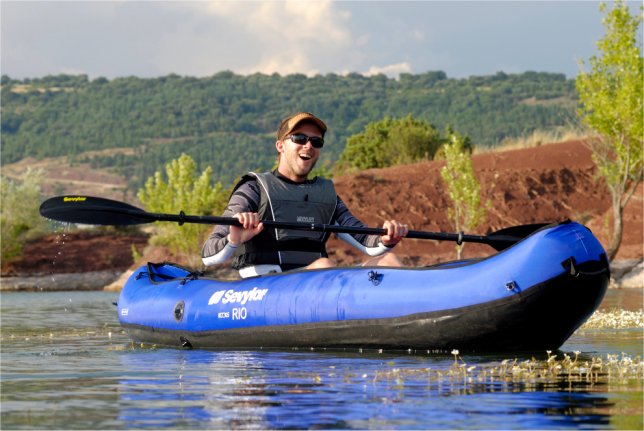 There are, essentially, three types of kayaks: hard-shelled kayaks, collapsible kayaks, and inflatable kayaks. If you have never owned a kayak before, an inflatable one may possibly be the best place to start. Inflatable kayaks are generally cheaper than other kinds of kayaks, light and portable, and even surprisingly durable. They can be used for white water rapids or just easy going paddling.

As a beginning kayaker, you may not yet know what suits your tastes best, so they can be a fairly practical option especially when you are first gaining your footing. Of course, there are pros and cons to consider with inflatable kayaks, and if you are a more experienced kayaker there may be a better option suited for you.

The inflatable kayak requires significantly little room for storage, you can even put it in your closet. Consequently, it can also fit in the trunk of your car so you don’t have to hoist it on top of your vehicle and then tie it down, only to untie it and lug it back down again. It is very portable and can be taken almost anywhere much more easily than a hard-shell kayak. You can pack it up to take on a plane or train across the country or even further. They don’t capsize easily and are typically fairly stable. They also have a pretty substantial safety advantage as they can’t exactly sink, being that they are full of air, unless they get critically damaged and a hole is torn in one or more air chambers.

Of course, the downsides eventually become apparent. Every time an inflatable kayak is used it must be inflated and then deflated afterwards which will require some patience and time. Because the kayak must likely be hauled inside your car, you may not enjoy having a dripping wet boat carcass soaking into your carpets. They will likely not last even as long as cheap plastic hard-shell kayaks, and you will need to be sure that the kayak can still hold air after being stored for a considerable time. They are much more difficult to maneuver against the wind since they are so light compared to a hard-shell kayak, and they are generally more slow due to their wider bodies. Sometimes they can cost just as much—possibly even more—than a hard-shell kayak. Price often depends on where you go.

While many people rave on the qualities and characteristics which inflatable kayaks have to their advantage, others much prefer the use of something more traditional and solid. It all comes down to the person and what they choose is better. There are situations in which you just can’t really beat an inflatable kayak—such as in cases where you are traveling a long distance. In other areas of performance or usability they may not match up to a hard-shell kayak. Each type of kayak carries with it the burdens of its faults and the glories of its abilities, to be appreciated according to every individual’s taste.

Here are some videos by inflatable kayak users in the UK:

1 thought on “Are inflatable kayaks any good?”