What are Stand Up Paddleboards? 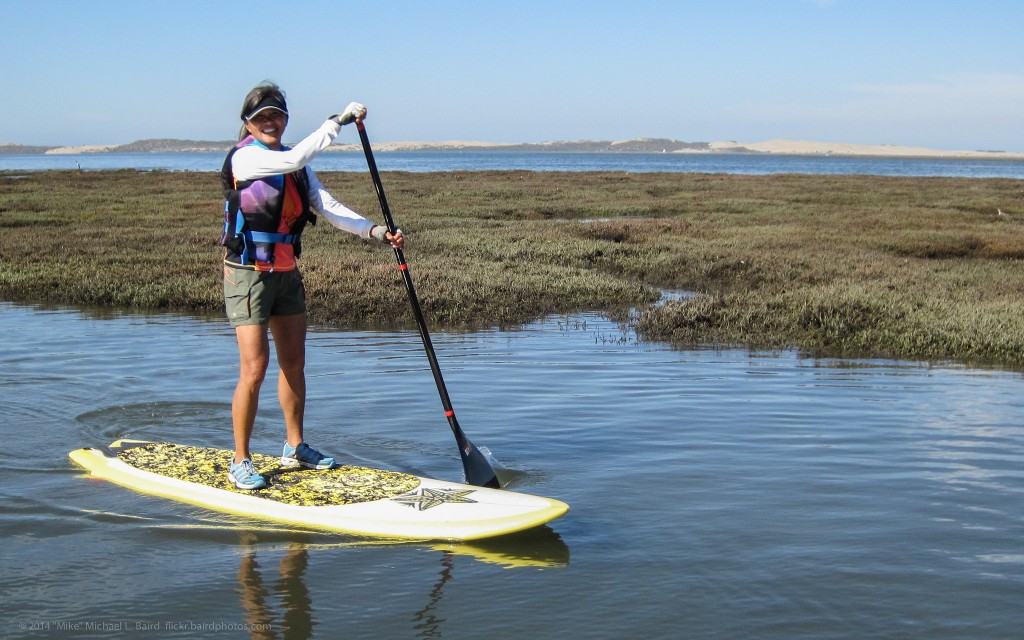 With all the new buzz about paddle boards, the craze has hit many sort of by surprise. What is this trendy new sport using something called a “paddleboard” anyway? The Merriam-Webster dictionary defines it as: “A long narrow buoyant board used for riding the surf or in rescuing swimmers.” Paddleboarding is called by some a combination between kayaking and surfing. It is actually a surprisingly easy and simple sport that at the most basic level takes only balance. The person paddleboarding will stand on a paddleboard with a paddle and dip their paddle into the water to propel themselves forward–basically, that’s all there is to it. A paddleboard is a long board very similar in design to a surf board which can support the weight of a human being.

Stand up paddleboards can range from between $800 and $2000 new. On average they are longer than 9 feet, but can be as much as 12 feet. They are made out of a variety of materials, but most have polyurethane or expanded polystyrene foam at the center with a casing that is constructed using glass-reinforced plastic. Some paddleboards are now inflatable, and others are made out of wood. Generally paddleboards have one or more fins to help it track the water, and paddleboards are much thicker than surfboards.

Wider boards are the best when it comes to stability, but narrow paddleboards are faster and easier to steer and operate. Board length is also important, and a lot of this depends on the size of the person. As contradictory as it may seem, shorter boards are useful both for beginners and experienced surfers, as they are easier to maneuver. However, longer boards are best suited for the aim of speed.

Stand up paddle boarding and stand up paddle surfing originated in Polynesia, evolving from surfing. In Hawaiian, paddleboarding can actually be translated hoe he’e nalu. Captain James Cook was famously noted as being the first European to witness the Hawaiian people paddleboarding. Being that the paddle boards were so large, ranging from 2 to as much as 5 meters, a paddle was sometimes used to power the boards. The chief often got the largest paddle whereas the lesser village people often had the shortest. The Hawaiians were the first known people to truly popularize paddleboarding for sport, but throughout history fishermen have paddled on long boards or rafts. Some form of stand up paddleboarding has existed almost since the beginning of humankind.

Modern paddleboarding has roots all of its own, originating in the 1940’s. It all started becoming fashionable on Waikki Beach, as the surf instructors would often stand on their boards to get a better vantage of surfers, sometimes even steering with a paddle. With the change of surfing and fashion, the paddle died out among most people. That isn’t the end of the story though. The history of the paddleboard is long and crooked, with many small offshoots. Charlie Force, for example, a carpenter from the UK, was said to have designed a hallow surfboard which he stood on and used a paddle to maneuver.

Paddleboarding has trickled through society for many years, without any clear and defined beginning, although it certainly is not a new or recent sport. Regardless of its semi-mysterious yet very broad history, paddleboarding has recently gained not only popularity but a much more rigid and standardized definition. It is now common to find information about paddleboarding online, in books, or to see it off the banks of a beach. Paddleboarding has consumed this present culture. In 2003, this definition was virtually non-existent, and now it is one of the more common water sports.

At the turn of the millenium everything began to change. Credit is given to different people associated with popularizing the trend, but where and exactly how the explosion began may not be traceable. It seems as though it spread on an individual basis like wildfire, but there may have easily been some paddleboarders at the very start of the new sport, spurring it forward. Three pivotal names which may be seen during the uprising of modern paddleboarding are: Vietnam veteran Rick Thomas, who was noted for being the first original paddleboarder, and Laird Hamilton and Dave Kalama for developing the sport.